I think of this series like it’s Stephen Colbert’s “Better Know a District.” It’s not like this will be complete or that I’ll do it all the time. There may be 4 in a row or nothing written towards it for a couple months…but it’s something to always come back to!

A side note on social media marketing: I’m still going to tell you “it depends” every time. Your business shouldn’t do it exactly like the guy next to you in the phone book (or whatever you use), but there will be some general rules and guidelines.
Today’s tip has an example from a super-great friend of mine, so let’s get to it.

This statement means a lot of different things, so keep it in mind when you’re posting for the next couple weeks until you get used to considering the timing.
First, the example from my super-great friend (a.k.a. husband), David. A friend of his had tweeted something about Titanic that he responded to. His response was only to her, not made public. Look at the retweets and favorites he got: 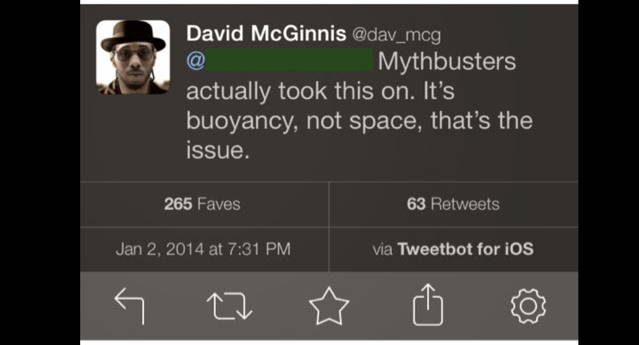 Soon after this he deleted it because a few days later he was still getting notifications about it. At some point that gets annoying..
I don’t know why it initially started getting attention, but I think I know why it continued. The Star Wars MythBusters episode aired January 4th. People looking on Twitter for MythBusters found this tweet and liked it. Why? Because #twitter #internet #idontknow.
I’m not saying David tried to get attention for that tweet; he would have chosen any other number of things to get attention for. But your business can pay attention to what’s going on outside of your company and you’ll eventually get lucky.
I hate to say it, but I can’t guarantee you success. If anyone is guaranteeing you success, I don’t think you should listen to them. There are too many factors both in and outside of yourself to guarantee marketing and advertising work like they’re “supposed” to.
There’s a lot you can do, but there is no magic formula.
That was kind of a side note, sorry. Back on track to timing–because, while success isn’t guaranteed,  there are things that you can do.
One. Post when your people are online. There’s research out there about when people are typically/mostly online. These are great guidelines! But it may be different for your fans.
Here’s an infographic of post timing guidelines for social media. I suggest starting here (or somewhere similar) and then changing based on when you find you’re getting engagement from your fans.
Two. Scheduling vs. Live Posting
I don’t have a problem with scheduling posts. It can be helpful to take just one hour a week to schedule posts so you can focus on other things. It helps you to develop a strategy and tell a story throughout the week too.
But this can’t be all you do. Social media is about engagement. So schedule posts, but let those random posts get out there too! Engage with those who like, comment, and post on your page. Schedule posts so you can get more done, but don’t forget about your accounts the rest of the week.
Three. There’s more going on in the world than what’s happening in your business.
Let me tell you a bad story. This isn’t specific, but it’s happened to numerous companies.
Company A schedules their tweets. The next day, a nationally-televised disaster happens. The kind where the entire nation is on Twitter and watching their TV’s 24/7 to see what’s happening next. Company A’s next tweet goes out: “What a great day it is! How are you using [Company A’s product] today?”
Holy cow, major FAIL. Pay attention to what’s going on around you. Delete or delay posts as needed. Or, maybe scheduling posts isn’t right for you. Either way, some live, off-the-cuff posting is necessary–natural disaster or otherwise.
Timing social media posts is important. It takes strategy, customer service, and for a person or team to own this part of your business’s communication. It’s more than just advertising–it’s marketing and a voice for both you and your customers. Put some time into it and you’ll start seeing some results.

What have noticed about the timing of social media posts?